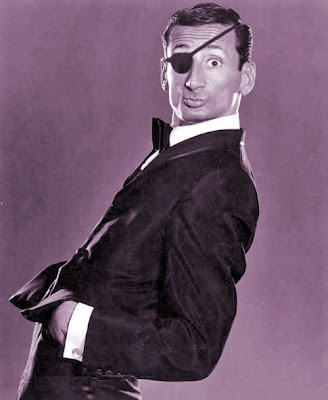 Jack Benard Nimble
This former stuntman for Joey Bishop formed "The One-Eyed Jacks" Cult after he fell on his head during the filming of "The Joe Besser Story". His group was comprised of men with only one eye who were named "Jack". There were 5 Caucasians named Jack (including himself), 3 Filipinos named Jack, 2 Vulcans named Jack and 1 Black Jack.
Their church was built in Las Vegas, eleven miles west of the Dipsy Doodle Theological Seminary and Ice Cream Stand.
Imaginary funerals were held each Sunday for Silent Film Stars, Jack Hoxie and Jack Pickford.
Here are a few of his doctrinal beliefs:
Mr. Nimble was struck by lightning while preaching to a group of film buffs at the grand opening of "Jack the Ripper" starring Jack Palance.
His "church" is now a half-way house for people convicted of illegal parking.
Posted by Eddie Eddings at 3:16 AM
Email ThisBlogThis!Share to TwitterShare to FacebookShare to Pinterest
Labels: cult, cult leaders, cults