Corky and a New Friend 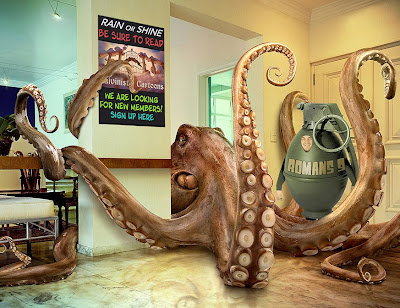 Corky makes new friends wherever he goes!
Here he is seen visiting the Old Sailor's Retirement Center in Jack-Tar, Florida. His new friend, he nick-named "Doc" is looking for an old one-eyed sailor who smokes a pipe and eats spinach. Seems they have a score to settle. Corky has a gift not unlike Francis of Assisi. Animals of all kinds take a liking to him when he is present. Just yesterday, he received an invitation from the Elks Club. Corky Velveeta's only natural enemy is the Great Spotted Kiwi of the Southern Alps.
Posted by Eddie Eddings at 12:01 AM
Email ThisBlogThis!Share to TwitterShare to FacebookShare to Pinterest
Labels: corky, friends, octopus, retirement, sailors