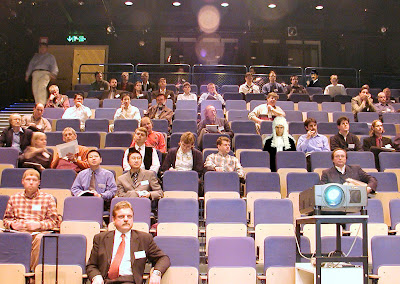 Be sure to enlarge photo for maximum viewing

Last year I was able to sneak into the Radical Arminian Theologians Symposium (or RATS) to see the reaction of their study on Calvinistic Cartoons. (That's me 7th row 3rd from left) The symposium viewed any blog that listed CC among its blog or site list. Among those also studied were Tried by Fire, Pyromaniacs, The Sacred Sandwich, While We Sojourn, Trail Boss, The Contempory Calvinist, A Pilgrim's Progress, Against the Current, Invasion of the Tune Snatchers, Persevering Pastor, The Renewed Mind, The Wittenberg Door, Gospel Driven Disciples, Underdog Theology, Come Unto Him, Well-Meaning Gentlemen with Different Ideas, Reformed Voices, and Stranger in a Strange Land.

After the conference had ended, the panel of judges set fire to the screen and began playing a heavily modified version of Calvinopoly where everybody is elected. I barely escaped with my life after Rich Landowner spotted me and released the hounds.

Posted by Eddie Eddings at 9:07 AM
Email ThisBlogThis!Share to TwitterShare to FacebookShare to Pinterest
Labels: Arminian, calvinistic cartoons, Calvinopoly, symposium