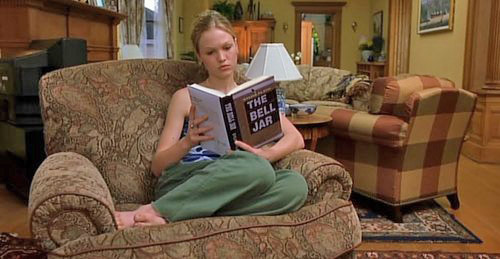 Few know that The Bell Jar, which will star Julia Stiles, has a character named Dr. Nolan, who in reality was Dr. Ruth Tiffany Barnhouse, the daughter of Donald Grey Barnhouse. The 2012 movie is supposedly truer to the semi-autobiographical novel than the 1979 film.
Here is a lengthy, but interesting link that interviews Ruth Barnhouse and sheds some information on her father as well. The information on DGB is not all that flattering, so be aware, if he is one of your heroes. Heroes have clay feet sometimes.
I have always loved reading Donald Grey Barnhouse. His four volume set on Romans is with me right now.

Former U.S. Surgeon General C. Everett Koop, who attended the Tenth Presbyterian Church for more than twenty years, said of Barnhouse: "His authoritative voice held my attention, his physical appearance was arresting, and his preaching was teaching of the highest intellectual order ... I always marveled at the simplicity of the faith of this very intelligent and learned man."
Posted by Eddie Eddings at 1:00 AM
Email ThisBlogThis!Share to TwitterShare to FacebookShare to Pinterest
Labels: article, Barnhouse, book, movie, The Bell Jar