The following is a scene from the Andy Griffith Show that certain sponsers decided to edit out of the final cut. It's a shame since it reveals more of the theological content the episode was aiming for. 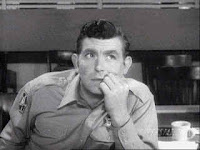 Floyd Lawson: You know Andy, I like what John Calvin said, he said "If Christ on His cross intended to save every man, then He intended to save those who were lost before He died. If the doctrine be true, that He died for all men, then He died for some who were in Hell before He came into this world, for doubtless there were even then myriads there who had been cast away because of their sins. . . That seems to me a conception a thousand times more repulsive than any of those consequences which are said to be associated with the Calvinistic and Christian doctrine of special and particular redemption. To think that my Savior died for men who were or are in Hell, seems a supposition too horrible for me to entertain." Calvin said that..
Andy Taylor: No, Floyd, that wasn't John Calvin who said that, it was Charles Haddon Spurgeon. That statement was in his autobiography. I know 'cause I'm reading the first volume to Opie every night before he goes to sleep.
Floyd Lawson: Then what did Calvin say?
Andy Taylor: Calvin said a lot of things Floyd. Why don't you go to the library and read his Institutes of the Christian Religion.
Floyd Lawson: That's a good idea, Andy…why, my grandson, Steven Lawson is there right now reading up on the Reformation. I will go there after I finish trimming your sideburns.
Andy Taylor: Okay, Floyd, you do that. And tell him I said I think he is a fine boy…studying for the ministry and all…
Floyd Lawson: Oh, Andy, one more thing…Opie still has my coffee table book on Leonardo da Vinci…do you think you could ask him to return it to me soon…I want to display it in my barber shop.
Posted by Eddie Eddings at 4:28 PM
Email ThisBlogThis!Share to TwitterShare to FacebookShare to Pinterest
Labels: Andy Taylor, Calvin, Floyd Lawson, Mayberry, reformation, Spurgeon