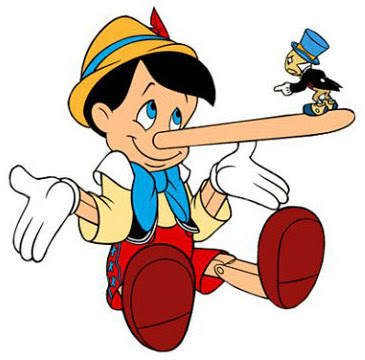 I had a co-worker, when working at the Dallas Morning News, who put in his resume that he had attended a certain prestigious college. He confided in me that he had just "walked through a few buildings while visiting the campus" one summer. He told me he could pass a lie detector test if need be. I have another friend who claims to visit royalty often. Come to find out, he justs eats at Burger King and Dairy Queen on weekends. In Dallas, there used to be a Mars Music Store. I could truthfully say I have been to Mars and back...but, that would be misleading. (No one ever believed me anyway...even with my space helmet on.) Back when I was in a rock band, I used to take credit for playing on the records the band had made - before I ever joined them.
Have you ever "told a tale" that was partially true? If you say you haven't you are lying! Have you ever torn down the wall between imagination and information to make you look better in someone's eyes or to impress someone you're dating? If you have, remember, confession is good for the soul.
Posted by Eddie Eddings at 12:30 AM
Email ThisBlogThis!Share to TwitterShare to FacebookShare to Pinterest
Labels: deception, fib, fictional, lies, mislead, truth