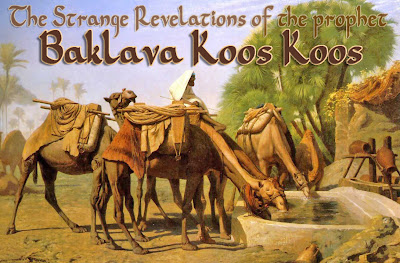 I knew, when I arrived at the tent of Baba Ganoush, that something was wrong. There was music playing, from a stringed instrument and a flute, but I could not tell from whence it came. I could hear weeping and mourning coming from inside. When I went to investigate, I found nothing. Not a soul. Not an animal nor a blanket. Deserted. And no sound...until, I stepped outside. This was unnerving, to say the least. But, I am a little used to this kind of thing...being a prophet and all. Still, you never get comfortable with such strange occurrences.

I decided to go back into the tent which was now sounding like it was full of an entire village of mourners. Again, the music ceased and I was left to ponder the meaning. After a few minutes of unresolved thought, I was thirsty and went out to fetch some water from the well. I couldn't believe my eyes! No well, water, no camels, no tent, no palm trees. Nothing but sand and sun.

A meteor slammed into me.

Suddenly, I awoke drenched in sweat and shaking from such a vivid dream. I turned over and spotted an angel standing at the entrance to my tent.

“Tell me angel, what did this dream mean?”

“What makes you think it was a dream, mortal?”

“Yeah, I was just joking with ya,” the angel lifted one hand and spoke again, “Your friend, Baba Ganosh, is no more. His earthly tent no longer houses his memories or soul. He's outta here.”

Saddened by the announcement, and happy for Baba, I asked if the angel could give him a message for me.

“Sure, it would be no problem for me.”

“Tell him that I thought that his last few years as a desert taxidermist were amazing. He really knew his stuff....tell him, that I intend to carve a small replica of him out of wood and carry it with me from now on. I will learn to throw my voice so it appears the replica is talking. I will make its head and mouth move to further enhance the illusion. I will come up with a routine so I can go perform my act wherever I go.”

“Okay, I'll tell him. Be right back,” the angel disappeared and immediately reappeared.

“Baba said, it's not the first time you will put words in his mouth.” Then the angel left for a place called Disneyland.

I will miss my old friend. But I will carry his little replica with me wherever I wander. He will be my little traveling companion...and now I will have an excuse for always talking to myself.

One thing though, I wish I had asked the angel about the meaning of the meteor.
Posted by Eddie Eddings at 12:08 AM
Email ThisBlogThis!Share to TwitterShare to FacebookShare to Pinterest
Labels: angel, Baba Ganoush, baklava koos koos, dreams