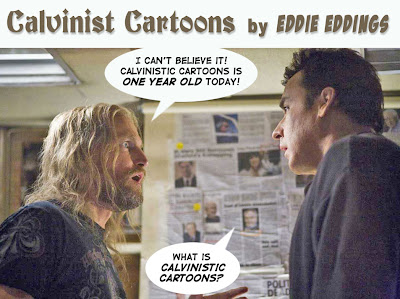 Well, only one year old and I feel like I have known some of you for a lot longer. Thanks to Melvin Swartz who performed a tracheotomy on me with only a pen and a straw last night as I was celebrated 365 days of blood, sweat and tears. Thanks to readers like Lubin Fleabody, who pulled me from a burning car in southeast Dallas five months ago. I would also like to applaud the bravery of one of the followers of Calvinistic Cartoons, Kenny Saltenmoocher, for throwing himself on the hand grenade tossed by Arminian activist, Sprinter McBee. Special thanks will be sent, with a check for six grand, to Phoebe Shinloin, for donating her bladder to the Methodist Hospital of Forgotten Dreams. To all the loyal readers, and to those who aren't really loyal but could be if they had the time, I bid you good providence. Just remember when you are using someone else's computer to secretly bookmark this site. They will thank you later, I'm sure of it.
Posted by Eddie Eddings at 12:49 AM
Email ThisBlogThis!Share to TwitterShare to FacebookShare to Pinterest
Labels: anniversary, B-Day, blog, year