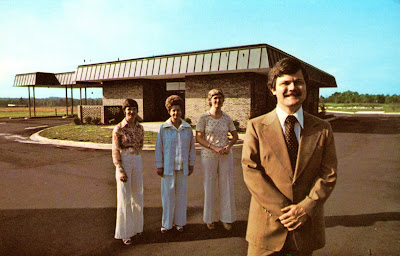 Adam Zapel with his three "angels"
"The Mission of Destruction and Mercy" was Adam Zapel's idea when he was resuscitated after he drowned in Lake Superior. He was known as "Apollo Adam" to his congregation. He claimed the three ladies pictured above were "female angels who were created in 1492. Their names, from left to right, are Anita Hugg, Carrie Oakey and Laura Norder.
He believed in members being whipped with "the belt of truth" if money wasn't given every Sunday. His doctrines were in the form of a creed and bordered on insanity, but over one hundred members recited them daily. Here is his "Apollo Creed":
We repudiate all deviation or departure from the Mission of Destruction and Mercy, in whole or in part, and bear witness to these essential visions of Apollo Adam and his apostolic new order which includes a side salad and a box of Twix.
The Holy Book of Choice is the only book we shall read unless instructed by our leader. Our attention is focused on "Who Moved My Cheese?".

The received Tradition of the Mission and its teachings as set forth by "the ancient angels of mercy," and especially as defined by the Seven Swans a Swimming of Lake Superior will be ever binding. Anyone who refuses will suffer five blows from "the belt of truth" and the "shoes of peace" will be thrown into the "pit of mesquite wood".

The Sacraments of Baptism, Confirmation, Holy Matrimony, Holy Orders, Penance and Unction of the Sick, as objective and effective signs of the truth of the end time prophecy which declares Apollo Adam holy prophet of this generation. In particular, we affirm the necessity of Baptism in grape juice to be the only way of deliverance.
The Holy Orders of bishops, priests and deacons as the perpetuation of God's gift of apostolic ministry, asserting the necessity of a bishop of apostolic succession (or a priest ordained by such) as the celebrant of the grand opening of Six Flags Over Zion.

The ancient office and ministry of Deaconesses as a lay vocation for women, affirming the need for proper encouragement of that office. That office can be purchased for only $25 per month.

Bishops as Apostles, Prophets, Evangelists, Shepherds and Teachers, as well as their duty (together with other clergy and the laity) to guard and defend the purity and integrity of the Mission can also be purchased for only $50 per month.

We declare our firm intention to seek and achieve full sacramental communion and visible unity with other believers who "have enough money to make a difference," and who hold the Mission and its followers in high esteem. Every new member will receive a hot air balloon ride and a coupon for a free appetizer at Ruby Tuesday's.

Adam Zapel was struck by lightning when he was atop a human pyramid outside his church in 2002. His body was shot from a cannon into Lake Superior. His church is now a used car lot.
Posted by Eddie Eddings at 3:16 AM
Email ThisBlogThis!Share to TwitterShare to FacebookShare to Pinterest
Labels: cult, cult leaders, cults