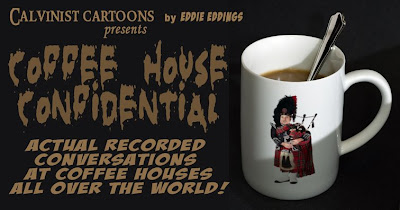 This episode of Coffee House Confidential is brought to you by
the Bumper Sticker Study Bible,
Genesis through Revelation - One bumper sticker at a time!
(with sticky notes by Flavius Joe Cephas)
This week takes me to "City Sippers", a coffee shop located in Mudstump, Oklahoma. I had my mini-recorder microphone hidden at a table where two Christian pastors were locked in an interesting discussion. Let's have a listen:
Sam: I don't follow any MAN! I follow Christ! You see, I'm not a Calvinist OR an Arminian - I just believe the Bible! Besides, Paul condemns your divisive ways in 1 Corinthians 1:12...y'know, one says "I am of Apollos, another, I am of Paul..."
Dave: Paul is condemning the practice of putting God's servants on "celebrity status" which is a form of idolatry...and he is condemning a spiritual pride that looks down it's sinful nose at other Christians. The group that states, "I am of Christ" in that passage had a Pharisaical attitude of one-upmanship. Because men are prone to wander from God, following ANYONE who claims he is a "Christian" but, who make HIMSELF the authority over Scripture - who exhalts HIS name over the Lord Jesus Christ, or who demands obedience to his own interpretation is just plain stupid! Paul never did that and neither did Calvin!
Spurgeon said, "Calvinism is nothing more than a nickname for Biblical Christianity." He was spot on. Calvinism isn't adherence to a person, but to a set of beliefs which are rightly in accord with the Word of God!
Sam: The Bible is my map. I don't need someone telling me how to read it...including you!
Dave: To understand a map fully you need to know how to read it. That's why they print a "legend" on the map. It reveals more about the map itself. It helps you to interpret the symbols and explains what you are viewing in precise detail!
Sam: Who needs it? I never use a "legend". I just track where I am going and go.
Dave: Listen, Arminianism has taken the original map and blackened out certain highways and drawn in alternate routes that run contrary to reality! It has pasted their OWN legend over the right one, that in no way conforms to the facts! This is not only misleading, but an act of extreme arrogance as well!
Sam: I told you before, I don't follow a man. I believe man has total free will and that God sovereignly gave man the last word in his own salvation. He can vote yes or he can vote no. It all centers around what MAN will do with his choice. It is not up to God to decide. It left that in our hands.
Dave: Then you are not an Arminian - you are a "Harminian". You hurt yourself and others with your "God-as-cosmic-bellhop" propaganda.
Sam: For that, no more frappuccinos.
Dave: I was the one who bought the coffee, not you.
Sam: Oh yeah.
Posted by Eddie Eddings at 11:08 PM
Email ThisBlogThis!Share to TwitterShare to FacebookShare to Pinterest
Labels: bumper sticker, coffee house, discussion, pastor, study Bible