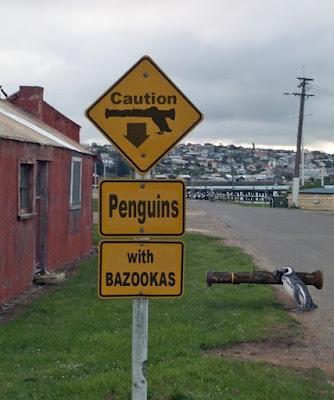 Two events have attempted to take the focus off of today's 500th birthday bash for John Calvin:
1. O.J. Simpson's birthday falls on the same day as JC's and
2. What will be known in the annals of history as "The Penguin Bazooka Rampage".
It seems a colony of penguins from Antarctica have been seeking out Open Theists and blowing them away. Police have arrested ninety seven but several have been in hiding since last night. A note was found by the police by an abandoned bazooka, but no one can understand the scribblings.
"Even though Open Theists are heretical in their theology, we cannot condone the actions of these renegade penguins!" said Pastor/teacher/movie reviewer Joe Bob Calvin, a Texan who claims to be a descendant of the famous reformer. (Happy Birthday old friend)
Posted by Eddie Eddings at 6:03 PM
Email ThisBlogThis!Share to TwitterShare to FacebookShare to Pinterest
Labels: bazooka, birthday, Calvin, heresy, open theism, penguins