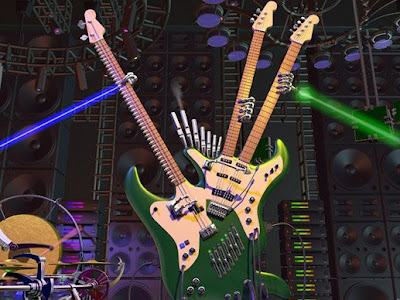 Here is another song I wrote. This was written a few years after God graciously opened my eyes to His sovereign grace. Most of my songs had a strong rock beat to them. Since you don't know how it sounds, take my word, it had a melody as well.
This one is entitled, "He's Mighty"
He's the Soveriegn Savior of the whole universe
He's searchin' for His people who are under the curse
He'll save 'em, He'll keep 'em, He'll bring 'em on home
Smack dab into Heaven singin' 'round His holy throne
(chorus):
He's mighty - He's mighty - He's mighty
Mum mum mum mighty

One day a dead man was lyin' in a grave
Bad to the bone, stinkin' up the cave
Jesus came by and called out his name
And I'm here to tell you that I've never been the same 'cause
(chorus)
Three crosses on the hill in the heat of the day
One man turned to Jesus, the other turned away
Look at the center cross, bring it into view
Ask yourself this question: On which side are you?
(chorus)
Well He walked on the water, made the blind to see
Cast out many demons when He went to Galilee
Jesus is the answer, He's the One who should be seen
He's the Alpha and Omega and all letters in between
(chorus 3x)
Posted by Eddie Eddings at 5:51 PM
Email ThisBlogThis!Share to TwitterShare to FacebookShare to Pinterest
Labels: Alpha and Omega, cross, lryics, song