Well, some may have noticed that two followers of Calvinistic Cartoons have ripped up their membership cards and left. Usually, I never know why...but, this time both of these men wrote me to tell me what was wrong and why they left. I appreciate that. The first letter is from Bosco Levene of Splattertown, Missouri. The second letter is from Tahoe McFern of Bladderville, New Mexico: 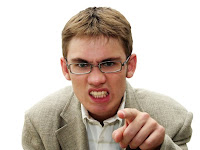 I have entered your Caption Contests over and over again and YOU deleted my entries. All my friends and family said I should sue you because it is clear that my jokes are worthy of awards.

My first entry was for Contest # 14...the one where the dude is shielding the woman from another dude. Here is my caption:

"Get away from here, madman! I don't subscribe to your newspaper and I never will. So go far from the farm or I will kill you! I mean it now! GO!"

The second time I entered, I posted this caption (for Contest #15 - the one with the singing and the playing and the hat and the lady):

"I will kill you for singing off key! I really mean it! Don't make me get up from this piano bench and prove it...ya low-down, flea-bitten hobo of a man!"

The third one was for Contest #16...the one with the man on the floor and one of the other men is holding a whip:

"Take back what you said about my expensive clothes or I will kill you! I mean it! Here, take this! And this! Now, will you apologize for your insolence? No? Okay, doofus...here some more lashes from my whip!"

It's apparent to me you are one-sided, two-dimensional, and flat-footed! I leave and I will never return! I mean it! I'm not lying! ...oh, yeah, you are also a lousy speller!

I joined your blog not knowing what a Calvinist was. As I read your attempts at humor, it suddenly dawned on me that you were serious about all this TULIP stuff! I am leaving because you attack other beliefs as well as your own...which proves to me you are insane! And your last posting was about WINE! ...also, Merlot looks a lot like "Merlin" who was a wizard! Are you condoning magic, witchcraft and drinking alcohol? Well, you "broke the straw" on the camel's back when you made fun of the Pope! What has he ever done to YOU?! I hope you drink milk that has gone sour! And then, bite into a donut that has ants crawling all over the insides. I am leaving and will create my OWN blog where no one says anything negative! I will call it..."A Blog for Those Who Have No Computers". And if I ever become king of England, I will have you banished to Rhode Island!

Posted by Eddie Eddings at 12:33 AM
Email ThisBlogThis!Share to TwitterShare to FacebookShare to Pinterest
Labels: calvinistic cartoons, complaints, letters