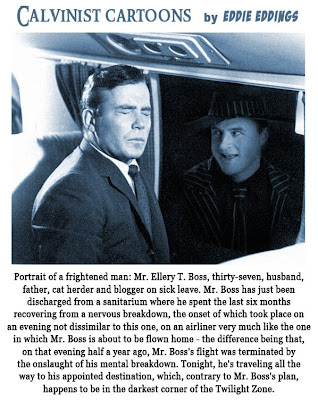 Click here for this week's episode to be in HD
Ellery T. Boss is a blogger on an airplane for the first time since his nervous breakdown six months ago.
He spots an emergent leader on the wing of the plane.
Every time someone else looks out the window,
the emergent leaps out of view,
so nobody believes Ellery's seemingly outlandish claim.
Ellery realizes that his wife is starting to think he needs
to go back to the sanitarium,
but also, if nothing is done about the emergent, he will damage the plane and cause it to crash. Ellery steals a sleeping pastor's Bible, and opens the window marked "Auxiliary Exit" to prove the emergent wrong on his view of Scripture, succeeding despite
the fact that he is nearly sucked out of the plane himself.
Once the plane has landed, although he is
whisked away in a straightjacket,
there is evidence of his claims: the unusual damage to the plane's engine nacelle — yet to be discovered by mechanics — that
presumably can only be explained as caused by something that
clawed at the structure's mainframe.
Posted by Eddie Eddings at 2:17 PM
Email ThisBlogThis!Share to TwitterShare to FacebookShare to Pinterest
Labels: airliner, Bible, blogger, emergent, scripture, twilight zone