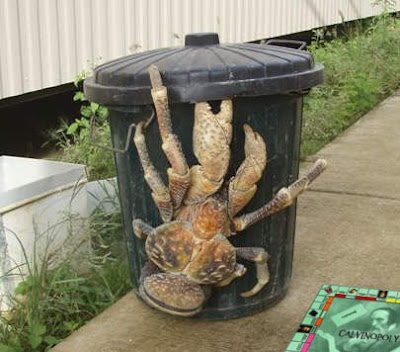 The coconut crab, Birgus latro, is the largest land-living arthropod in the world and is probably at the limit of how big terrestrial animals with exoskeletons can get under the prevailing conditions. Their body is divided into four regions; the cephalic lobe, forepart, trunk, and opisthosoma. It is a highly apomorphic hermit crab and is known for its ability to crack coconuts with its strong pincers in order to eat the contents. It is the only species of the genus Birgus.

It is also called the robber crab or palm thief, because some coconut crabs are rumored to steal shiny items such as pots and silverware from houses and tents. There is one report from a fan of Calvinistic Cartoons, Bebo Stanks, who claims a coconut crab robbed him at gunpoint and stole his Honda Civic.