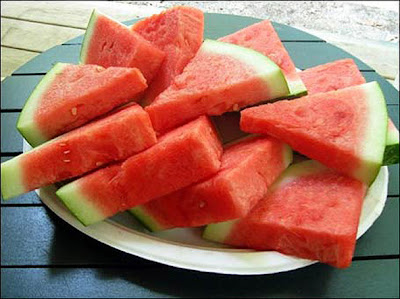 It's not exactly "brain food" but nothing refreshes a body like cold slices of watermelon!
Originating in Africa, watermelons were first cultivated in Egypt where testaments to their legacy were recorded in hieroglyphics painted on building walls. The fruit was held is such regard that it was placed in the tombs of many Egyptian kings. It is not surprising that when Johnny Appleseed met Johnny Watermelonseed they became bitter enemies, and would have fought unto death had not little Johnny Pumpkinseed stopped them.
Posted by Eddie Eddings at 5:44 AM
Email ThisBlogThis!Share to TwitterShare to FacebookShare to Pinterest
Labels: Johnny Appleseed, refreshment, treat, watermelon