The Journal of Cotton Adams #26 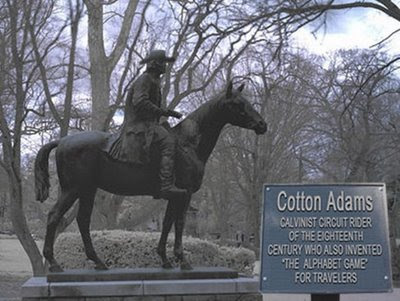 I took horse at half past three. There was no moon or stars, but a fog so thick that I could see neither road nor rock. I was headed for Bad Manors, a town with a reputation for it's lack of hospitality. The fog quickly vanished as I drew nigh to Bad Manors revealing the dawning of a new day.
As I approached a fork in the road, the mist fell again on every side, blinding me and my horse as well. Because of this, Calico, my faithful steed, stepped on the fork and injured the tender part of his hoof. The pain caused him to throw me into a watery bog and I was covered from head to toe with a putrid layer of mud and vegetation. Thanking God all the while for what could have been a deadly fall on sharp rocks, or a rattlesnake bite instead of a carelessly thrown eating utensil.
I took Calico's reins and walked him into town. After bandaging his foot at the livery stable, I left to find a room and clean myself up. I was scheduled to preach in the evening at the only evangelical church in town.
True to the town's reputation, the innkeeper was extremely rude and rather brash. I took much abuse before I even registered my name. I could take no more when he said with a scowl, "If I had a son who was an idiot, I would make him a preacher!"
"Evidently, your father," I replied, "was of a different opinion."
I picked up my saddlebags and went upstairs.
Feeling more guilty by the minute for my remark, I went back sometime later to apologize to the innkeeper, only to find someone else in his stead.
"Where is the gentleman who was here a few hours ago?"
"They rushed him to the doctor because he discovered he had another mouth to feed!" said the bald-headed man without looking up from his book.
"That doesn't make sense," I stated.
"It does if you have a tapeworm!"
I returned to my room to pray for his well being.
Coincidentally, my sermon tonight is entitled, "Hell - the place where the worm dieth not."
Posted by Eddie Eddings at 4:10 AM
Email ThisBlogThis!Share to TwitterShare to FacebookShare to Pinterest
Labels: circuit rider, cotton adams, doctor, preacher, sermon