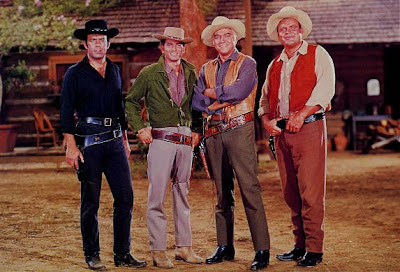 ABC (The Arminian Broadcasting Company) in association with the 700 Club presents "The Ponder-osa". Join Ben Notright and his sons, Adam, Hoss and Little Joe as they sit around the ranch pondering Arminian theology.
In tonights episode:
When a Calvinist circuit riding preacher, Grant Revelation, (played by Jimmy Steward) is found wounded and beaten by a group of chariamatic outlaws known as, "The Name It and Claim It Gang", Ben takes him to the ranch to recover. During his stay, the preacher convinces the Notrights that the Doctrines of Grace are true. Ben changes the name of his land to the "Wonder-osa" because of the wonderful grace he has been granted from God. He also changes the family name to "Heartright" and starts raising sheep, thus, bringing the series to an end because of the angry Arminian sponsors.
There is a rumor that CBS (The Calvinist Broadcasting System) will pick up the program after the fall.
NBC (Nothing But Charismatics) executives said Friday that they will have nothing to do with the series unless the writers are willing to be slain in the spirit.
Posted by Eddie Eddings at 7:12 PM
Email ThisBlogThis!Share to TwitterShare to FacebookShare to Pinterest
Labels: Bonanza, calvinist, circuit rider, preacher