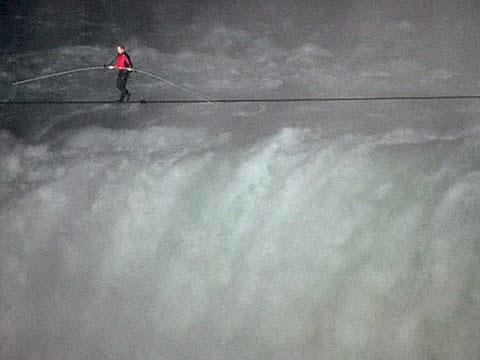 Eric Santini, the semi-famous Niagara Falls tightrope walker, told police he thinks he spotted an elderly Arminian woman push an elderly Arminian man over the falls a few days ago while crossing the Falls. (see above) "I'm not positive about it, because at that moment a fine spray of misty water hit me square in the face. The news reports said suicide, but I'm inclined to think otherwise."
Reporters tried to follow Mr. Santini, but he jumped back on the tightrope and took off across the Falls. A few brave newspaper reporters and one tour guide tired to follow. They only made it half way before falling to their deaths.
Mr. Santini has witnessed over twenty-three crimes as a tightrope walker, including a man who followed him across the rope to rob him of his pocket watch.
Police now know that the couple wasn't Arminian and that they were not the couple known as Mr. and Mrs. Nigel Pettibone.
Posted by Eddie Eddings at 3:38 PM
Email ThisBlogThis!Share to TwitterShare to FacebookShare to Pinterest
Labels: Arminian, death, Niagara Falls, Nigel Pettibone, police, reporters, tightrope