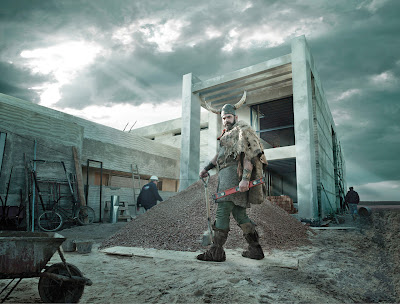 click on the pic for to make biggerer
Many have asked me recently, "How come you haven't written about the Viking cult leader, Olaf Norris?" Well, to be honest, he just seemed to drop out of the public eye in 2008.
My cracked research team in Sugarland, Texas did some investigation and came up with the following information:
Olaf Klak, who changed his last name to Norris (because it sounds like Norse), was once the leader of a cult known as "The Striking and Biking Hiking Vikings". His group of sixty five wore horned helmets and Viking underoos and would frequently be seen eating apricot cream cheese danishs while hiking through city civic centers.
His teachings led many members to live in the crevices of Mount Rushmore. Each member had to be baptized in the icy waters of a public swimming pool and hung upside down to dry for at least ten minutes. Olaf taught that climate change was of the devil and that daylight savings time was a ploy to confuse Scandinavian lands and parts of Greenland.
When Olaf was arrested for littering and sentenced to die on Skull Island, Ed Young came to his rescue. After talking with Olaf and paying for his release, Ed convinced Olaf to abandon his cult group and help build a parking garage for his new airplanes.
Today, Olaf Norris works for Ed Young Inner-tainment Enterprises Construction Company where he pulls in a six-figure salary each year.
This just in...Olaf Norris passed away yesterday and, as requested by his wife, was set on fire, along with his ABBA CD's, on a pyre that was set adrift at Galveston beach. Ed Young gave a hip-hop message that angered almost everyone who attended. He escaped on his private jet before former cult members could catch him.
Posted by Eddie Eddings at 12:30 AM
Email ThisBlogThis!Share to TwitterShare to FacebookShare to Pinterest
Labels: construction, cult, cult leaders, cults, Ed Young, members, Mount Rushmore, viking