The Journal of Cotton Adams #24 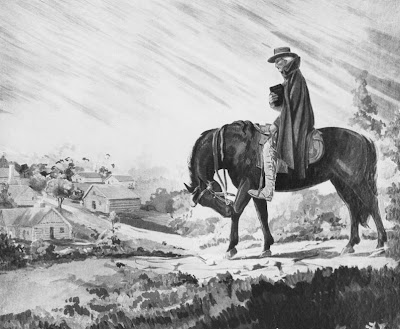 September 30, 1739
I had been assigned an outdoor amphitheater to preach the Doctrines of Grace that was next to a heavily wooded forest. A company of revelers and dancers had, in the afternoon, taken possession of the place knowing full well of my intentions to preach there. Some advised me to go to another area, for many of the revelers were rough looking, brawny and muscular with scars and broken noses…and that was the women. The men were even more so. I wouldn't hear of it. When I stood on a block of wood and announced the sermon would begin shortly, a burly, barrel-chested man pushed his way through the crowd and threatened me with a beating. I said I would pray for his soul and closed my eyes to begin my intercession. Not more than a second into my prayer, I heard the crowd yelling. I opened my eyes to everyone running frantically toward the town of Bee Bonnet. I can only attribute this miracle to the power of God and to the large black bear that came out of the woods. I made the decision to depart as well.
My sermon, an hour later, inspired by the events mentioned, was entitled, "God bears with the sinful so that his Word can spread."
Posted by Eddie Eddings at 4:20 PM
Email ThisBlogThis!Share to TwitterShare to FacebookShare to Pinterest
Labels: bear, cotton adams, crowd, prayer, preacher, sermon