The Nikola Tesla Glow in the Dark Bobblehead 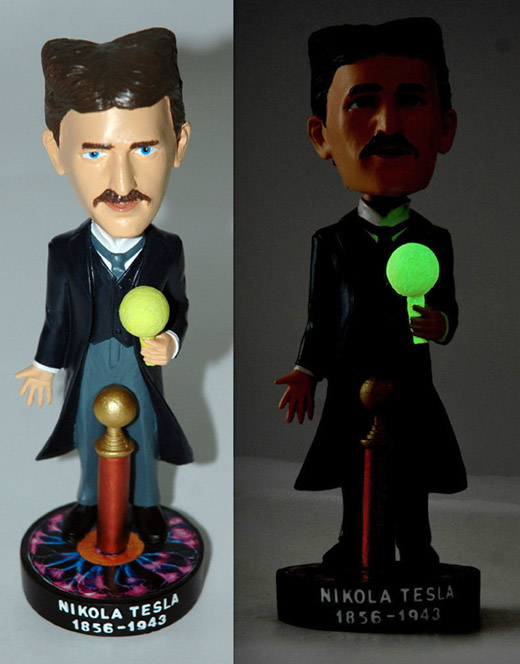 Nikola Tesla and Samuel Clemens (Mark Twain) had quite the interesting friendship over the years.
Twain “cured” Tesla of an illness through his writing:

“I had hardly completed my course at the Real Gymnasium when I was prostrated with a dangerous illness or rather, a score of them, and my condition became so desperate that I was given up by physicians. During this period I was permitted to read constantly, obtaining books from the Public Library which had been neglected and entrusted to me for classification of the works and preparation of the catalogues. One day I was handed a few volumes of new literature unlike anything I had ever read before and so captivating as to make me utterly forget my hopeless state. They were the earlier works of Mark Twain and to them might have been due the miraculous recovery which followed. Twenty-five years later, when I met Mr. Clemens and we formed a friendship between us, I told him of the experience and was amazed to see that great man of laughter burst into tears.”

And Tesla once cured Twain’s constipation by having him stand on a “healing machine”.
And in later years, Clemens would regularly visit with Tesla, engaging in stunningly intelligent entertainment such as shooting an x-ray gun at his head for fun. There’s even rumors that Twain’s story A Connecticut Yankee In King Arthur’s Court, an early sci-fi classic, based its main character around Tesla.
Posted by Eddie Eddings at 9:40 PM
Email ThisBlogThis!Share to TwitterShare to FacebookShare to Pinterest
Labels: bobblehead, Mark Twain, Nikola Tesla, Samuel Clemens