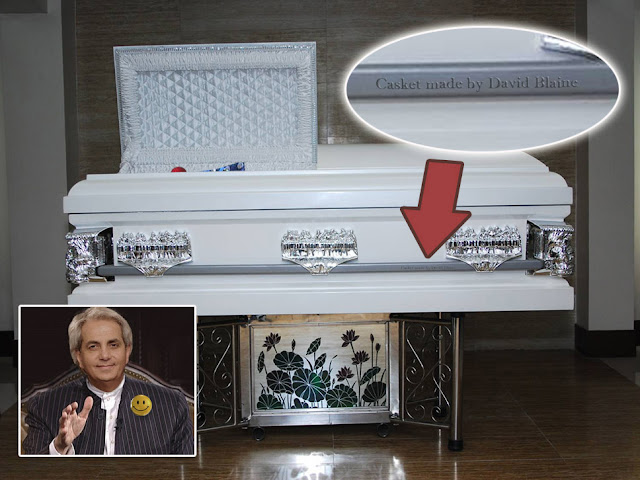 click on photo to enlarge if you really feel you have to
I suspected something afoot when I heard Benny Finney's funeral was to be held at the Harry Houdini Funeral Home in Denmark, Ohio. Knowing that the funeral director was a fan of Calvinistic Cartoons, I had him snap a photo of the coffin that was being used.
Upon further investigation I spotted this detail (see photo) showing that this coffin was once the property of David Blaine, the magician.
Something is rotten in Denmark and it ain't Benny Finney's body!
Funeral director, Fritz Langella, skyped me said that "Benny Hinn arrived and demanded that the doors be locked so that his faith could be free to work without hindrance from unbelief. He handed every funeral staff member a hundred dollar bill and told us to go buy a burger. His bodyguards were pretty mean looking so we headed on out for lunch. Benny Hinn told us that we should expect a miracle when we return."
Can you believe this crazy stuff?
Posted by Eddie Eddings at 12:30 AM
Email ThisBlogThis!Share to TwitterShare to FacebookShare to Pinterest
Labels: Benny Finney, Benny Hinn, funeral, investigation