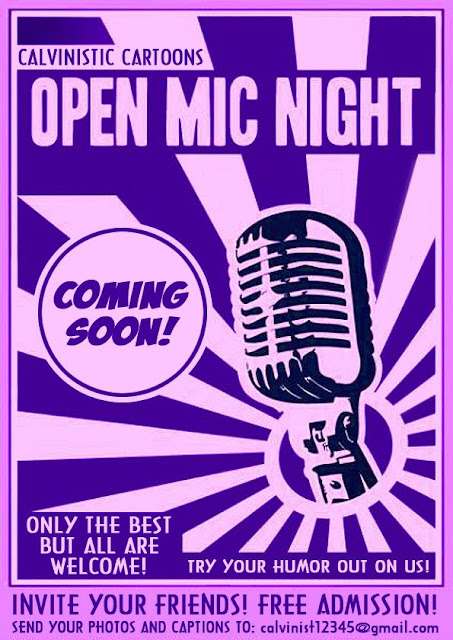 Ever since I started this blog I have had jokes and ideas sent my way. It was sort of awkward for me to turn someone down because it wasn't a perfect fit. Often I would suggest they start their own blog. (Actually Phil Johnson suggested that to me - again, Thanks Phil - I'm glad I took your advice!)
So now, I think I have come up with an idea that will satisfy everyone!
Open Mic Night at Calvinistic Cartoons
This will be an occasional feature where I don't have to do anything but post the photo (as is) and joke (as is). The "comic" will be introduced so please send a brief, funny bio along with your photo (HAS to be at least, a medium size JPEG) and the caption or dialog in the email. Keep the jokes theological. That means you can joke about denominations, Arminians, Calvinists, Atheists, Cults or Evolutionists. Just keep it clean (photos and jokes). I will let the comic know when "he is on" by email. Please, not only invite your friends, but ask them to become a follower of this humor blog. It's free! Costs them nothing!...and besides, my goal for 2011 is to have seven hundred million loyal fans...or semi-loyal fans, either way.
My email address is printed on the bottom of the poster. It's real. No joke.
Announcement!
The Calvinistic Comedy Club will have it's first Open Mic Night on Friday, October 8, 2010. I will pick 5 (the number of Grace) of the best comics to stand and do their best to make you laugh or bring a smile to that tired old face of yours. It may even help you sleep better. Whether yours is picked or not doesn't matter. Every joke I can use will stay in the Vault of Mirth until next time. This will be a continuing series. (until it is stops) So send in your photo (medium JPEG) send in your caption (Theological content) and send in a short and humorous bio ('cause I be the MC - and that will help me with your intro)
So instead of inviting just the people you know, why not get out the white pages and start calling every single person in your city. We have room for everyone! And you can bring all the food and non-alcoholic beverages you want! Oh yeah, and please be kind to the comedians, they need a little applause at the end of their acts. Thank you and see you at the Calvinistic Comedy Club, downtown Blogger City. Corky will open with his "Ballad of Romans 9". See ya there!
﻿
Posted by Eddie Eddings at 12:45 AM
Email ThisBlogThis!Share to TwitterShare to FacebookShare to Pinterest
Labels: calvinistic cartoons, captions, email, humor, jokes, open mic night, photos