My Ties with the Syndicate 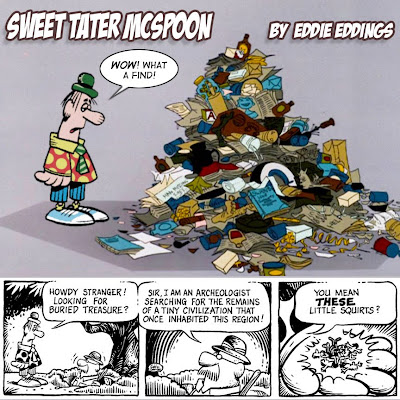 I have attempted to publish a comic strip with the syndicates four times. One strip was named "Writer's Block", one was locally syndicated for a while in the Austin Statesman newpaper entitled, "Silent Partners". That lasted six months. Another comic strip was called, "Epistle and Apostle". The strip above was called, "Sweet Tater McSpoon", and was nearly picked up by King Features. It came down to two they were willing to back and I lost. (I don't know the name of the other strip - they never told me)
Just thought I would throw some of my past junk onto this blog ever once in a while...it helps when you are scraping the barrel for ideas. This was the first one.
Posted by Eddie Eddings at 12:30 AM
Email ThisBlogThis!Share to TwitterShare to FacebookShare to Pinterest
Labels: art, calvinistic cartoons, cartoon, cartoonist, comic strip, syndicate