In the original pilot episode (never shown on TV) there were TWO secret agents who quit the organization. After resigning, both are abducted and taken to what looks like an idyllic village, but is really a bizarre prison. Their warders demand information. They give them nothing, but only tries to escape.

In the photo below, we see Agent Orange (played by Mr. Orange) and the other, Agent John Drake (Patrick McGoohan) speeding down the road in the opening sequence. 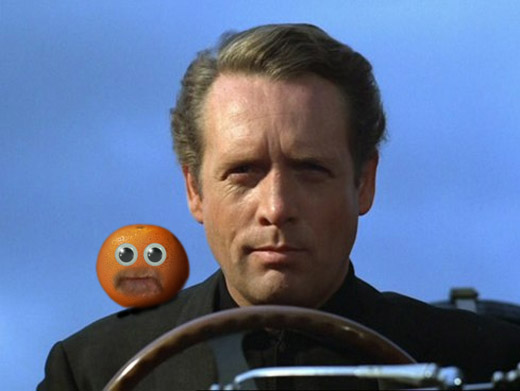 Mr. Orange had to drop out of filming after the first two weeks because his wife was pregnant (she was as big as a grapefruit) and having complications. Mr. Orange went on to star in the TV movie, How Orange Was My Valley.
Posted by Eddie Eddings at 4:57 PM
Email ThisBlogThis!Share to TwitterShare to FacebookShare to Pinterest
Labels: Agent Orange, escape, John Drake, prisoner, secret agent, TV show