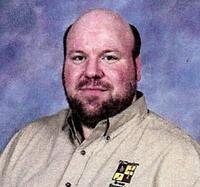 I just found out that my friend, Mike Ross, died. I used to see him every year when I attended the Christian Booksellers Convention. Bob (his father) and Mike were always there with the Pilgrim Publications booth, smiling and introducing many to the great Spurgeon books they published. Mike was a joy to be around. His exuberance and love for life was uplifting. He reminded me of a combination of Charles Spurgeon and Hoss Cartwright. He is worshiping the Lord Jesus Christ face to face now...and I know he has probably run into Spurgeon by now.

MICHAEL ROSS (1963-2012) OF PILGRIM PUBLICATIONS AND
PILGRIM BOOK STORE GOES TO BE WITH THE LORD (09-05-2012)
By Mike's Father, Bob L. Ross
In one of my Bibles, my son Michael had long ago written these few words when he was between 8 and 9 years old::
"Michael Ross
John 3:16
Jan. 8, 1972)"
Right beside those words, I later wrote the following:
"Michael confessed faith in Christ as Saviour on Nov. 25, 1973.
I had preached on Abraham's faith."
Michael was 10 years old.
He had his 49nth birthday on Wednesday,  August 29, 2012.
For most of his 49 years, even from an early age, Michael was enthusiastically devoted to working in the publication and distribution of C. H. Spurgeon's sermons and other books. You can no doubt find Mike'  fingerprints on Spurgeon's sermons and publications perhaps all over the world where he has shipped book orders.
Funeral services are currently being planned for Saturday morning at First Baptist Church, Fairmont Parkway at Red Bluff Road, Pasadena, Texas.
Michael sent regular offerings from Pilgirm Publications to support Missionary
Daniel Shanks in the West Indies and Missionary Allan Roman in Mexico.